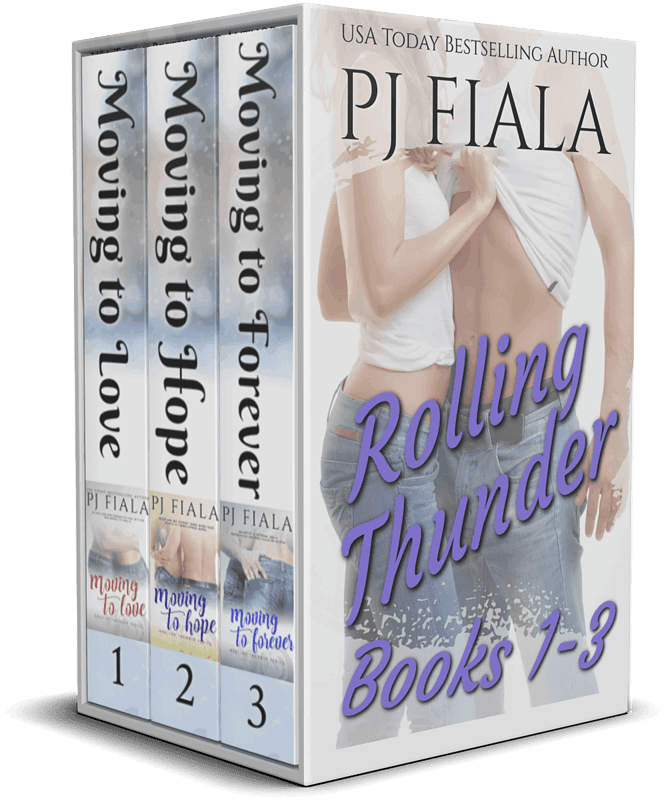 Separately they had dreams; Together they made them come true.

Love family sagas? Steamy Love Stories? Friendships that stand the test of time? This series has all of that and so much more. Follow the Sheppards as they find love, over-come obstacles and learn what life is like when you find your one true soul mate. 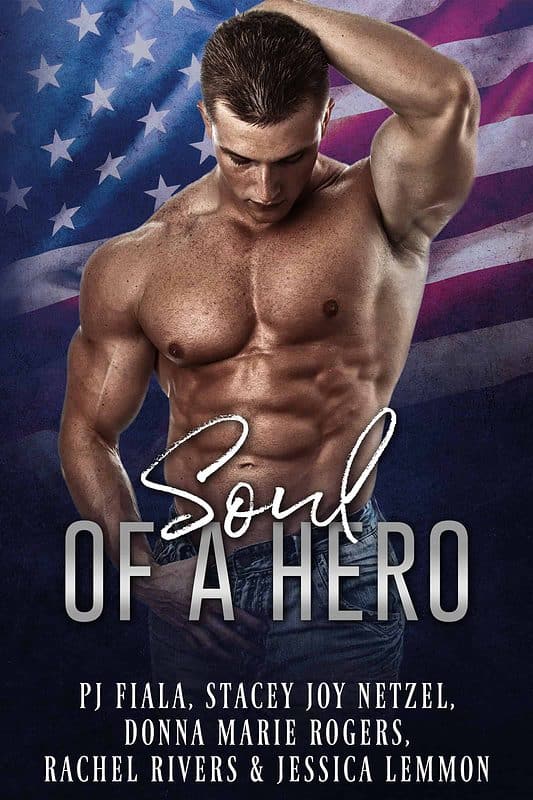 Soul of a Hero

eBook: $3.99
Authors: PJ FIALA, Donna Marie Rogers, Jessica Lemmon, Rachel Rivers, Stacey Joy Netzel
Series: Box Sets, Book 2
Genres: Military Romance, Romantic Suspense
Tags: Box Set, Military Romance, Romantic Suspense
This anthology of all brand new stories will only be available for a LIMITED TIME. Get your copy before June 30, 2020. After that date, they will no longer be available in one set.
Rory: Finding His Match by PJ Fiala
Alice-Al-Tucker fights hard for respect as a female DEA agent while bringing lowlife drug dealers to justice. Success in her current assignment would ensure a coveted promotion, but taking down a cartel while working with the man who broke her heart years ago is harder than she imagined.
Detective Rory Richards has had better luck with his career than women. He gets an unexpected second chance with the one-who-got-away, only to find himself in danger of losing everything when the ruthless criminals he and Al are after mark them for dead.
Don’t Dare a Diamond by Stacey Joy Netzel
Raine Diamond is destined for Olympic equestrian gold—until a horrible accident leaves her unable to face the jump that could end her career. Army veteran Reyes Torrez is tasked with getting her back in the arena, but he recognizes her crippling case of post traumatic stress as if he’s looking in a mirror. Can they help each other heal, or will the fallout destroy dreams that have begun to merge into one?
Once a Fool (Houghton County Book 1) by Donna Marie Rogers
Army veteran Officer Cameron Nichols is jaded when it comes to the opposite sex. So why does the cute new librarian have him tied up in knots? Harley Rose Lawson isn’t looking for a relationship—she’s looking for her long-lost brother. A search for family leads her to the love of her life, but when Cam betrays her heart, the happy future she imagined threatens to crash and burn.
Engulfed by Rachel Rivers
Dallas Fire Lieutenant Keeley Summers can read fire like the pages of a book. It speaks to her as it winds up, down and around its victims. She’s never lost a crew member, but that doesn’t mean she’s never lost anyone. Owen Prescott broke Keeley’s heart when he left school to join the Army as a combat K9 handler. Plagued by memories, he’s returned to Dallas to start over and build a legacy to honor his fallen teammates, but an explosive encounter with Keeley stirs feelings too hot to ignore.
BAD BOY BLUES by Jessica Lemmon
He’s not your typical bad boy…
With his dangerous job and busy life, Officer Brady Hutchins prefers steamy one-night hookups over romantic relationships. The beautiful stranger in Evergreen Cove fits that profile perfectly. But after a scorching encounter leaves them both breathless, he’s considering a future with the gorgeous brunette… If only he can convince her to stay.
More info → 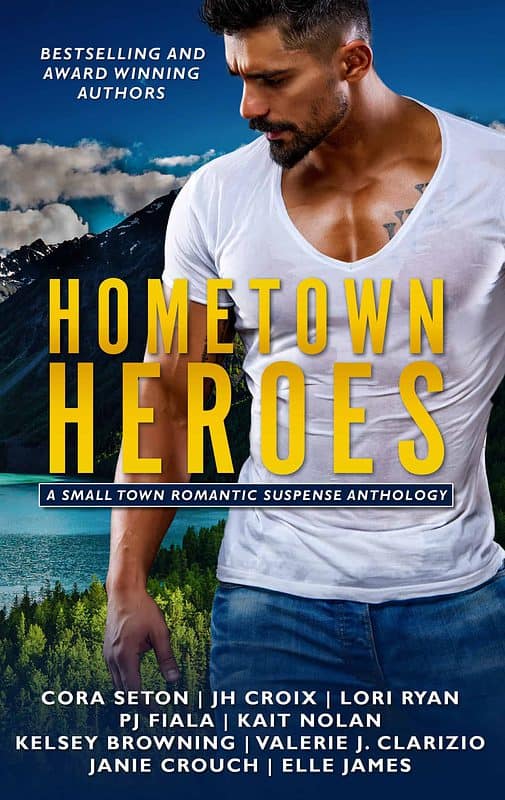 High stakes in a small town bring out the best in these heart stopping heroes. Nine stories where the only thing that will get your heart pumping harder than the romance is the suspense that will have you turning pages well into the night.

Cora Seton Issued to the Bride One Navy SEAL Going rogue on his last mission landed Navy SEAL Brian Lake on a fast track out of the Navy, so when Army general Augustus Reed steps in with an intriguing new mission—marry his daughter and earn a share of his Montana ranch—he can’t say no.

But Brian’s not the only one who wants Two Willows—or Cass.

Will falling in love be the most dangerous mission of all?

JH Croix Take Me Home Marley moves back home to find security in the aftermath of a brutal robbery. She feels an instant connection with her new neighbor, a smoldering Navy SEAL.

The danger Marley is trying to escape is chasing her, and Gage finds he’ll do anything to protect her. He never considered his own heart might be at risk. A first in series small town romance suspense story.

Lori Ryan Love and Protect In serious danger and on the run in a desperate attempt to save her child, Laura seeks refuge at a Texas ranch. She finds an instant connection with gorgeous rancher Cade -- but there’s no hiding from the past. She’ll be hunted no matter where she goes. This pulse pounding romance is the first book in the Heroes of Evers, TX Series.

PJ Fiala Ford: Finding His Fire Ford Montgomery is on the trail of the arsonist who killed his parents. When that trail leads him to sexy waitress Megan Marshall, things take an unexpected turn. Megan is being hunted by a deadly cartel, Ford is now in their sights, and the arsonist is still running free. Their only chance of survival is if Ford and Megan learn to trust each other quickly and walk into the fire together.

Kait Nolan If I Didn’t Care Autumn and Judd are two friends bound by blood. When the nightmare from their past returns, will it rip them apart or cement the bonds forged years ago? A romance-heavy, small-town suspense that’s first in a series.

Kelsey Browning Going Hard Wealthy sports agent Grif Steele returns to North Carolina because his hometown has fallen on hard times and needs his help. When a stalker targets his ex-lover Carlie Beth Parrish, will Grif step in to protect her, or will the fourteen-year-old secret she's keeping tear them apart forever?

Elle James Soldier’s Duty Home in Eagle Rock, Montana, to search for his missing father, Delta Force soldier Angus McKinnon runs interference in murder attempts on his former flame whose secret could destroy them both.

Nine full length standalone novels from NY Times and USA Today Bestselling and award-winning authors available for a limited time only. Grab them FREE now before this deal is gone for good!

5pm-7pm Break for dinner (On your own)

Tickets are on sale now!

How to buy tickets: Go to  https://mayheminthemidwest20.bpt.me

Join us in the Facebook group to get to know the authors in attendance this year (we’re doing takeovers and playing games in there) https://www.facebook.com/groups/173169283558819/

Like Loading...
Read more
Jun
2
Wed
Reader Author Get Together 2021 @ Cincinnatti Marriott
Tickets
Jun 2 – Jun 5 all-day
Along with sponsoring the Saturday Breakfast for all attendees, Stacey, Donna and I are also sponsoring a Thursday, June 4, 2020 Boardroom. Check it out.
Celebrating Our Heroes
10:00 a.m. – 12:00 p.m. – Plinko: Play games and earn Plinko chips for a chance to win prizes!
12:00 p.m. – 2:00 p.m. – Supporting Our Vets: Come in and decorate toiletry bags for our veterans and their families (to be filled by Authors4Veterans and donated to Fisher House WI).  If you are so inclined, you can also write a note to go inside as a thank you for their service.
2:00 p.m. – 3:00 p.m. – Who do you think she is?  We’ll read amusing—and some embarrassing—stories about each other, you guess the author!
3:00 p.m. – 4:00 p.m. – Craft Time! Decorate bookmarks or toiletry bags. The bookmarks are yours to keep, the toiletry bags will be filled and donated to Fisher House WI to be given to veterans and their families when they check in to the VA hospital.
4:00 p.m. – 5:00 p.m. – Pictionary: Join us and your fellow readers for some Pictionary madness!
5:00 p.m. – 6:00 p.m. – Plinko: One last chance to get in on the fun!