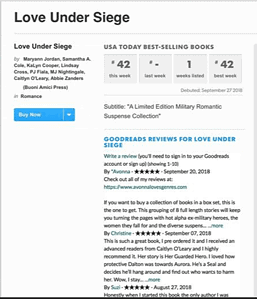 As you know, I was recently in a box set with seven fabulous fellow authors. These authors are classy, sassy and a bit badassy!  And if you’re in my reader group, PJ Fiala’s Road Queens, you’ll recognize that tag line as the Road Queens tag line.  But, it’s all true. And this box set, Love Under Siege, landed on the USA Today Best Sellers List at #42!

These ladies came together (and I’m proud to say included me), to write and publish an amazing set of Military Romance Novels.  Each of these authors has been writing for many years. Two of them, Maryann Jordan and Caitlyn O’Leary, had already established themselves as USAT Best Selling authors.  What we did with these stories was nothing short of fantastic. The reviews alone (you can still read the reviews on Goodreads here) we off the charts and full of praise. The set hit a chord with readers who love our military heroes and the men and women who love them. To say I’m proud of this set is an understatement.  I’ve read the stories and I’m blown away.

I used to say that if I hit the USAT with an anthology I wouldn’t put it on my covers because, well, I had help getting on the list. But, we had a discussion in our group, my fellow authors and I, about what some box sets include and how they are often just old stories thrown together with 20 plus authors just to make the list. We didn’t do that. There were eight of us and we made the list, but we didn’t use gimmicks or play games, we wrote great stories and shared them with our readers. There was no drama in our group of authors. There was no posturing or back stabbing. What we did have was mutual respect, support and an exchange of ideas which we all benefited from.

I’ve changed my mind. I’ve been on such a high for the past two days and my fellow authors are as well.  Therefore, as soon as I can get my cover designers to add USA Today Best Selling Author to my covers, I’ll be proudly displaying them for you all to see.

Ladies, Samantha A. Cole, KaLyn Cooper, Lindsay Cross, Maryann Jordan, MJ Nightingale, Caitlyn O’Leary and Abbie Zanders, thank you from the bottom of my heart for going on this journey with me. Thank you for the ideas you so willingly shared and thank you for wonderful stories.

I’d be remiss if I didn’t thank our management team from Buoni Amici Press, Drue Hoffman and Debra Presley for the amazing job they did for us and their hard work and dedication. Thank you!

The box set is now off the market but never fear, we’ll each be releasing our individual stories in November.  If you didn’t get the chance to purchase the box set, here’s a list of the stories included in it so you can run out and grab them on your own when they release.

Tuff Enough – Samantha A. Cole  Release date – November 4, 2018
While security operative Jason “Tuff” Tanner lives for dangerous assignments, he likes his downtime in his quiet neighborhood too. But that peacefulness is suddenly interrupted when his new next-door neighbor becomes a target for someone hell bent on revenge. Canine rescuer Concetta “Chet” Suarez brings all his protective instincts to the surface, along with feelings he’s never experienced with any other woman. Will he lose her before he ever gets a chance to make her his?

Dreams or nightmares. Truth or lies. He can’t tell them apart after he sees the woman in his dreams. She is the key to his past, present, and future… She just buried her husband next to her fiancé who was killed in an explosion while they were on a mission together ten years ago. She doesn’t need another man in her life, until someone tries to kill her.
Or if you want a real short one: The instant he realized the last ten years of his life were a lie, he put her in danger.

Lincoln Winter is hired to bring in a criminal who is selling arms on the black market and he never misses a mark. That is until the sultry Skye Sommers crosses his path and unwittingly gets herself caught up in much more than she can handle. Can they stay alive long enough to find a killer, an arms dealer and love?

Mace Hanna’s security business keeps him busy…too busy for a relationship. When providing security for a single mom and her young son who has witnessed a murder, he vows to keep them safe…and finds love along the way.

Undercover FBI agent, Jackson Black doesn’t expect to find love while working deep undercover on a RICO case. But he can’t resist Dawn, the sexy accountant, who keeps crossing his path during the investigation putting both of their lives on the line.

Her Guarded Hero – Caitlyn O’Leary
On the anniversary of the tragedy that hurled him into darkness, Dalton Sullivan escapes to Lake Tahoe to be alone. The last thing he expects is horse trainer, Aurora Chance to literally fall at his feet. As danger and raw emotion churn around them, can Dalton be brought back into the light?

Not Quite Broken – Abbie Zanders

Former POW Brian McCain is so busy fighting his demons, there’s not enough left over for anyone else – not even the one woman who has a way of shining light into his darkness. But when a serial killer turns his sights on her, Brian realizes he’s not quite as broken as he thinks he is.