I think we revisit this topic every 911, but I think it’s important that we don’t forget.

In the United States, September 11th has been changed from another day on the calendar, to a day we remember as one of America’s greatest tragedies.   On September 11, 2001 19 Islamic extremist from the group al-Qaeda, stole 4 air planes to wreak havoc on our country. Two of the planes were flown into the towers of the World Trade Center in New York City, a third plane hit the Pentagon just outside Washington, D.C., and the fourth plane crashed in a field in Pennsylvania.

I remember being in the dentist chair having my teeth cleaned and we had the radio on. The hygienist cleaning my teeth stopped working and said, “Did they just say a plane hit one of the towers?”

She turned the radio up and we both were stunned at what we were listening to. As I left the dental office, it still had not been determined that it was terrorists.  I walked to my car, and as I started it up and began driving to work, the second plane hit. I pulled over and listened as the announcer said, “We are under attack.”

I’ll never forget the feeling of numbness. Never having lived through anything like this, I continued on my way to work, and upon arriving at the office, one of the girls there, who lived very close and run home and brought in a small television that we crowded around watching the third plane crash into the Pentagon.  Then later in the morning the fourth plane hitting the field in Pennsylvania.  The day was one of disbelief and then fear. My son Zach was a Marine and my immediate dread was that he would be deployed.  I was right, we was activated and deployed to Iraq early the following year, but that’s a different story. 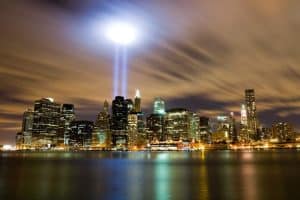 To deal with this terrible feeling of being under attack and unable to do anything about it, President Bush encouraged us to continue on with our lives. That by not doing that, we were letting them win. Days and then weeks went by and I remember watching the news reports of the resilient people cleaning up the after math in New York and at the Pentagon.  They continued on.  They persevered as they dug out the rubble and found their lost family members and co-workers.  The police and fire fighters found their lost comrades and mourned, but still they moved on.

This is the strength of humans.  We are able to stand up, dust ourselves off and move forward, even when a little piece of our heart is gone.