Be in the know about new releases and reader exclusives!
Sign Up!
Skip to content
We love our military heroes!
Autumn Apple Salad 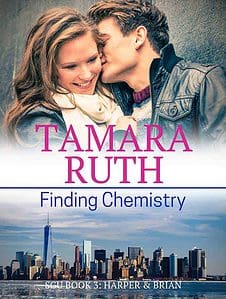 Christmas in New York. Boys to spare. What’s a girl to do?

Harper expected a boring winter break at home until her mother announced they were off to New York. Updating her social media status results in an even better surprise: her secret crush asking her out.

But Christmas at the far end of Long Island turns out to have quite a few other perks. One of them is Brian, a guy who’s smile launches her heart beat off the charts. Can Harper handle two guys? Does she want to? Having doubted her ability to pick the right guy before, this time Harper’s got to follow her heart and hope she doesn’t mess up.

Finding Chemistry is the third book in the Smith & Guy University series. It’s a standalone story. If you like to start at the beginning of series, the first book, College & Chemistry, is FREE on all platforms. At SGU, as in life, there’s no course to tell you how to fall in love. You’ve got to figure it out for yourself, just like Harper and her friends.