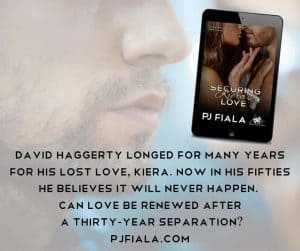 When I planned the series, I hadn’t even thought of a story for David.  But, somewhere along the way he started speaking to me.  I wrote a short story for he and Kiera and thought that would be the end of it, but nope, he wanted more.  So, I began delving into David and Kiera’s story and I found myself writing as they shared their story with me.  I guess they felt they had more to say and since they were in the sharing mood, I obliged them. 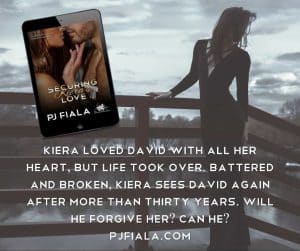 I’m super proud of how the story is coming along and I hope you will be too.

Can love be renewed after a thirty-year separation?

David Haggerty longed for many years for his lost love, Kiera. Now in his fifties he believes it will never happen. He’s been married and divorced and now finds solace in his security business.

Kiera loved David with all her heart, but life took over. She was the only one who could save her father’s life. But, to do that, she had to leave David. Battered and broken, Kiera sees David again after more than thirty years. Will he forgive her? Can he? 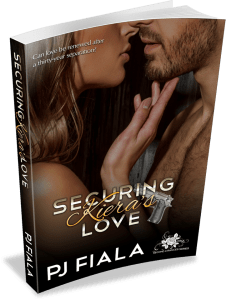 2 thoughts on “Securing Kiera’s Love is now available for preorder! 😍”