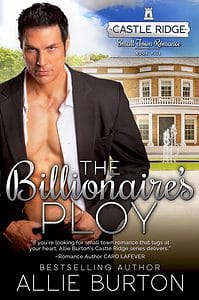 All’s fair in love and business.

Billionaire Jackson Croft refuses to let anything interfere with his merger and marriage plans. His merger. His brother’s marriage. When Emory Barrington returns to Castle Ridge and catches his younger brother’s attention, Jackson needs to take drastic steps to stop the flirtation. Even if it means using himself as bait.

As a child Emory was infatuated with the younger Croft brother, so when he invites her to a party she can’t resist. Until Jackson interrupts their dance, tries to bribe her, and then steals a kiss. A kiss that vibrates to her soul.

To make up for the attempted bribe, Jackson offers her a job decorating his Denver penthouse. She’s just starting her interior design firm and can’t turn the business away even if it means working closely with the billionaire. The project turnaround is fast and the attraction between Emory and Jackson grows faster. She believes she sees the real man beneath the façade, but when she learns of his double-dealing her heart can’t take the betrayal.

In this take on the Sabrina story, can deception lead to love?