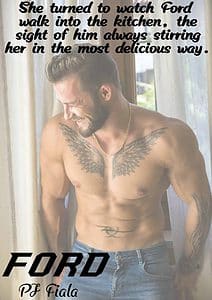 She swallowed. Well, now that was more than she knew or cared to know. “Um …” Licking the dryness away from her lips, she looked into his eyes. Dark and mysterious, he could look totally menacing and damned sexy at the same time. His dark hair held a sheen to it and her fingers itched to touch it. As he stood here before her, he exuded a raw power and strength. He’d been sitting in a truck all night, yet he didn’t look bedraggled and worn. His strong jaw once again held that hint of a shadow from not shaving, which added to his mysterious image.

Want bonus chapters?  You can only get them during pre-order!  Don’t miss out.

[tweet_box design=”default” float=”none” excerpt=””Megan, honey, we have to go.” Ford, was still there watching her try not to crumble. She looked up from her dresser, and into his eyes and it was there that she saw a softness she’d never believed could be there. @ibooks https://www.pjfiala.com/books/ford/ #booklover #newrelease “][/tweet_box]