I had the pleasure of sitting down and speaking to Author Ronnie Allen about her new release, Aries.   I hope you enjoy her interview an ]]>

Where did your inspiration come for Aries?

1. My inspiration for Aries came from several places. I was writing it before I got my contract on Gemini and I didn’t know whether or not to continue with the same characters. Why write a sequel to a novel that hasn’t sold yet? But, after a relatively few submissions Gemini did get a contract by Black Opal Books, a traditional publisher. By that time, I had fallen in love with the new characters I had created for Aries. Even though the second book in the series has different characters, my readers will be meeting Dr. Trenton from Gemini as a consultant.

I love MMA and wrestling but I want to keep my protagonist a forensic psychiatrist. This way if I decided to change characters I’d be able to fit in Dr. Trenton. However, as I was creating Dr. Frank Khaos, I literally fell in love with the man. He’s polar opposite to Dr. Trenton, so they’ll be an awesome mix in the third novel of the series, Scorpio, which I am writing now.

I’m definitely, what we know in the writing world, a plotter. I worked on Aries for a good five months before I sat down at the computer to type. Because I had such copious notes that filled up a huge five pocket, spiral notebook I was able to complete typing Aries, a 122,000 word manuscript in three months and 10 days. My publisher wanted it immediately, even sight unseen, so that two weeks after I submitted it, I received a contract.

Yes, my characters took me into many different directions and I wound up letting out more from my childhood and young adult life than I had planned. Mainly, my childhood asthma and the torment I had gone through. Writing is a catharsis for me, and I guess the universe wanted me to tell this story of my life that readers will see through the antagonist, AriellaRose Larcon. I won’t say anything more about it here, because I want the readers to go through the emotionality in the story. So I guess I can say my life experiences have influenced the story in a big way. An interesting point is that Aries was put up for preorder on my mother Esther’s birthday. When you read the book, you’ll see cause and effect. The book was supposed to go up over the weekend, but my mom, delayed it, deliberately. 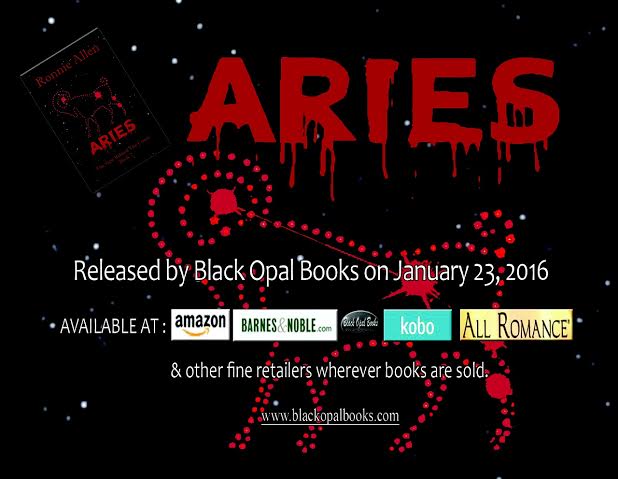 2. How is this book different from others in the genre? Aries is blended genres, romantic thriller, paranormal thriller, paranormal romance, steamy thriller. That is one big difference to a traditional thriller or traditional romance. Most traditional thrillers do not have a steamy sexual element, and in Aries the hero and heroine are really the protagonists. The protagonists are detective Samantha Wright and forensic psychiatrist Dr. Frank Khaos. Yes, they drive the plots, notice I said plots, because there is more than one in the story, thus another difference from a pure romance.

In a nutshell. Aries is not for the squeamish, weak-kneed, faint hearted, or for anyone who doesn’t like scorching sex. If you do want a thriller that takes you deep into the minds of killers, in a roller coaster ride through the five boroughs of New York City, with a steamy romance that builds between a ‘rough around the edges’ BJJ fighter, forensic psychiatrist, and a conservative, former teacher, rookie detective, then Aries, is right up your alley.

Enjoy an excerpt of Aries:

Lying. Deception. Cover-ups. Anger. Revenge. Death. That’s what happens when an Aries-obsessed killer combines black magick rituals, knives…and murder.  Samantha Wright, a rookie NYPD detective, gets her first case, a big one, by stumbling over the body while jogging in the park. Sam has a lot to prove, both to herself and to her new precinct, on this serial murder case involving fashion icons in New York City. Together with a rough around the edges BJJ fighter, forensic psychiatrist, Frank Khaos, Sam chases down leads through the five boroughs of NYC. As the bodies pile up, sparks fly and Sam and Frank, polar opposites, go from their dislike of each other to setting the sheets on fire. But their main suspect is hooked up to an IV in a hospital bed, so how has she pulled off five murders in seven days? And can Sam and Frank stop her before more innocent lives are lost?

The lead detective said the case was cold, no new leads, but she didn’tbuy it. This was one case she was determined to solve…

Sam scanned the office. Nothing great. A bland doctor’s office in a hospital. Sterile. White walls. His diplomas hung on a wall opposite his colonial, dark wood desk. No pictures on the wall. Either he wasn’t a showy kind of guy, or he didn’t feel that this place was his milieu.

She deduced that it was both. If she was going to help him find his wife’s killers, she’d have to know him and, so far, this hunk hadn’t let out a clue to his emotionality. Everything she needed to know about him was hidden behind his even temper and soothing, deep voice. She had to make a connection with him, even on a primal level.

“Is this your private office?”

“Yeah. I insisted they get me something where I could write out my reports in private. Hate doing them at the nurse’s station. Way too busy for me.”

She removed a huge file from her bag and put it on his desk, looking for the slightest reaction. Nothing.

Frank didn’t pay attention at first. He didn’t seem to be in a hurry. She couldn’t believe that it didn’t affect him anymore. That surprised her and worried her at the same time. He had probably been through Jen’s folders more than a million times and didn’t expect anything different from these new ones. Discouraged and pained would describe how he probably felt. It had been over two years. It was considered a cold case now. She agreed with the lieutenant on reopening it. Never give up on a colleague’s case, no matter how long. There’s no statute of limitations on a murder case, so she’d do what she had to, even wake up the dead.

Ronnie is giving prizes to FIVEpeople who comment, winners chosen randomly by Ronnie. So, please, comment away!