Molly McLain has a great sale going on right now!  For only .99 cents you can grab your very own copy of Can’t Walk Away.  Take a peek.

A convenient, casual, and completely orgasmic fling. What more could a girl want?

For the past year, barista Ally Barrett has been content to spend her weekends distracting River Bend’s hottest commodity–the sexy, too-serious sheriff. Their casual arrangement suits her independent nature just fine…until it doesn’t.

Sheriff and Army Guardsman Mark Dunn lives to serve the people of his community and his country. Ally is the only woman who’s never asked for more than his nights–and the only one he’s ever considered giving his days, as well. Too bad duty says otherwise.

When an unexpected pregnancy flips their no-strings understanding on its head–and tarnishes both of their reputations–Mark has a tough time proving he wants a real relationship and not just reelection. But if this sheriff knows anything, it’s how to fight for what he believes in–Ally’s heart. 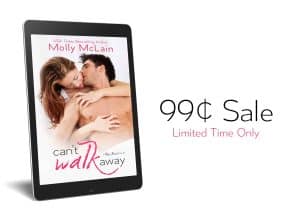 Ally was sitting in a booth with the new fire chief.

Nick threw his hands in the air and made an explosion sound, and Ally’s red ponytail danced along the nape of her pale, slender neck as she laughed. She had her back to the door, but since she was on the clock—or at least, she should have been—Mark expected she’d at least turn to acknowledge him.

Because apparently Nick was too goddamn fascinating. He should smash the guy’s nose in just like old times.

He didn’t though. Fucking badge. Instead, he stalked to the counter where Gladys waited with an uneasy expression on her face.

“Morning, Sheriff,” she greeted him, her eyes darting to the booth and then back again. Probably wondering if he was going to make a scene or let the show go on.

“Morning, Glad. Working alone today?” He slid out his wallet with one ear to the conversation a few feet away. Nick was telling Ally about some training he’d had recently. Something had gone wrong and—imagine that—Nick saved the friggin’ day.

Ppfftt. Like his pansy-ass training had nothing on the shit Mark had dealt with in Iraq, but that wasn’t something he’d ever dream of telling Ally about, let alone pat himself on the back for.

“Nah, Ally’s just on a break.” Gladys blinked up at him, probably waiting for the bomb that was his ego to explode like one of Nick’s arrogant gestures.

“It’s only eight o’clock. Break time already?” Tossing some cash on the counter, he arched an eyebrow.

“She’s having a bad morning. I told her to take it easy.”

Gladys shrugged as she counted his change. “Don’t know. She’s just out of sorts.”

“Looks fine to me,” he snipped, bitterness dripping off every word.

“She always looks fine to you, Sheriff.” Gladys gave a tentative smile. “You might want to remind her of that.”

Too late? Fuck that. It would never be too late for him and Ally. Would it?

As Gladys made his coffee, he kept his back to the booth and counted to ten, steeling his composure so when he finally did greet the duo, like any small town sheriff would greet the patrons of a quiet coffee shop, Ally didn’t notice his discomfort. Or his jealousy.

“Hey, man, how’s it going?” Nick called before Mark had fully prepared himself.

He turned and flashed a grin that tasted like shit. A grin Ally didn’t see because she seemed to be making a concerted effort not to look at him. “It’s going. How about you? Settling into the new gig all right?”

“You know it.” Nick stretched his Hulk-like arms across the back of the booth and, it was in that moment, Mark knew Gladys was right—his time was ticking. The cocky glint in the firefighter’s eyes promised as much.

So, he strolled over to the table and, though his fingers itched to touch Ally and stake some sort of claim, he resisted. He settled for another smile instead. This one just for her.

“Hey, Al,” he said in a soft, intimate tone that finally had her glancing up at him. Her sooty eyelashes batted against her pale, freckled cheeks as she blinked and did her best to give him the same easy smile. She failed, and he noticed the fine tremor in her pretty pink lips immediately. Made him want to lean in and kiss them. Help them relax a bit.

“Hey,” she said and, hot damn, if she wasn’t breathless. The tiny pulse in her neck beat frantically and all he could think about was putting his lips against that tempting patch of skin. Right there in the middle of the coffee shop.