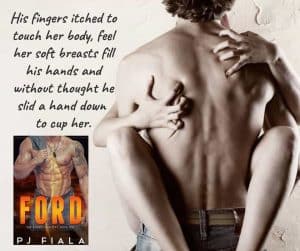 Shuffling through the pictures once more, Ford stopped on the picture of Megan. Waylon June’s ex-wife was a pretty little thing. Green eyes that sparkled at the camera and thick auburn hair trailing to just past her shoulder blades was a stunning combination. Her sweet, perfect smile and smattering of light freckles across her nose spoke of innocence and purity. But you aren’t married to a drug dealer and remain pure. Those two things don’t go together. And she had an arrest on her record.

He looked up and saw the sign above where she worked: The Log Cabin Restaurant. He shook his head and muttered, “Why in the hell would you work in a restaurant, Megan?”

He glanced through her dossier again. Four years of nursing school. Worked in the field in a hospital for two years, a nursing home for ten, then abruptly quit and began working at The Log Cabin as a waitress. What would make a single woman give up a career where she made good money to sling hash in a little place like that? If her ex was any indicator, she was trouble or looking for it.

Entering the diner, the bell above the door called out his entrance. A red-haired waitress behind the counter glanced his way and smiled. “Take a seat anywhere you like. One of us will be around with coffee in a minute.”

He nodded and glanced to the right. A couple of empty tables sat toward the middle of the dining room and one empty booth toward the window. The booth called his name, so he strode over, slid on the vinyl seat to the middle, and picked up the menu. The smell of bacon and fresh apple pie floated in the air to his nose. He swallowed the lump that formed in his throat. His mom made the best apple pie he’d ever eaten. He loved the spices and cinnamon in her pies, and she always added an extra dash of it for him. He hadn’t had apple pie since she died. It was these little things that caught him off guard. Emmy and Dawson, too. They spoke about it every so often, each of them with their own apple pie story.

Glancing around the room and taking in the occupants, he noticed a single gentleman sitting in the corner opposite him and realized he was assessing the room as well. He was by himself in a booth—no food in front of him, just coffee.

Megan walked out of the kitchen, swung past the coffeemaker and began filling the customers’ cups. He watched her move, graceful and casual as she gave each patron a bit of attention and a nice smile. She stopped at his table, and he heard her intake of breath when he looked into her eyes. Eyes that, by the way, the picture in his truck did not do justice. Green like a spring day, deep around the outside of the iris, lighter green toward the pupil and hypnotizing. Full lashes framed the green jewels, and he could see she barely wore makeup. Clear skin, faint freckles dusted her nose, and her full sensual lips held just a touch of gloss. I’ll be damned.

“Care for coffee?” she chirped.

It took him a moment to respond, his mind lagging behind and thinking other thoughts. Clearing his throat, he responded, “Yes. Please.”

He turned the cup over that sat on the matching saucer at his place setting and slid it to the edge of the table. He watched as she poured, her arm lifting just enough for him to see the outline of her breast hidden behind her light green apron. It was easy to see what Waylon saw in her, but what in the hell did she see in Waylon? That man was pudgy, unkempt, and a drug dealer. Made no sense.

“Have you had the chance to look at the menu? Special today is chicken if you want to forego breakfast and slide into lunch. Otherwise, we have all the usuals—eggs, bacon, sausage, pancakes, French toast and my favorite, Eggs Benedict.”

“Thanks. I’ll have two eggs over easy and whole wheat toast. Then, if you’d be so kind, I’d like to know where your ex-husband is.” 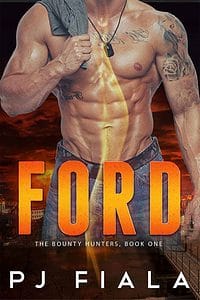 She stepped back, and he saw her jaw tighten. She practically hissed, “Is this what you two are doing now? You’ll keep sending in more and more of you until you’re satisfied that I’m not lying?”

She jerked her head toward the opposite side of the room. “You and Marcus. He’s been hounding me all damned week. I’ll tell you what I told him—several times.” She leaned in, lasered her eyes to his and continued. “I don’t know where that useless piece of shit is, and I don’t care. I haven’t spoken to him in about five years. I don’t even have a phone number, and again, I don’t want it. If you want your precious item back, go find him. He doesn’t come to me and he won’t and I sure as hell have no intention of going to him since. I. Don’t. Know. Where. He. Is.” She finger jabbed the table as she said each syllable as if it made her point clearer.

She straightened her spine and tossed her head in Marcus’ direction. Slowly shaking her head back and forth as if to scold him, she turned to him again. “Now, any other way I can make myself clear?”

He straightened his spine, glanced over at Marcus, and then looked into her eyes. “I don’t know Marcus. I also don’t know about any precious item. What I do know …” He leaned toward her, set his jaw and locked eyes with her. “… is Waylon helped Bobby Ray June escape from the prison transport van on the way to his trial for killing two people in a fire. I. Want. Waylon. And. Bobby. Ray.” He finger jabbed the table just as she had previously, to emphasize his point.

Gasping, her free hand flew to her mouth, her eyes closed, and she swallowed. Opening her eyes, she softly asked, “Bobby Ray killed someone?”

She made her way to the kitchen, her stomach twisted, and she thought she’d lose the little bit of the Eggs Benedict Nila had made for her. Bobby Ray always was a piece of crap. She hated it when he came around. He leered at her and creeped her out. She complained to Waylon about it, and he told her to pull up her big girl panties. Toward the end of their marriage, whenever Bobby Ray would come by, she’d disappear to the grocery store or her best friend, Jolie’s, house. She knew he was dangerous and not mentally sound, but she had no idea he was capable of murder.

She tucked her order slip for the gorgeous, but probably dangerous, man in the booth by the window, beneath the spring on Nila’s order wheel.

“Order for table eight is up, Megan,” Nila called out when she saw her approach. Taking a deep breath, she grabbed the two plates and carried them to the nice couple, asking if they needed a coffee refill.

Keeping herself busy wasn’t a problem as the restaurant filled up. “Order up for table seventeen.” Squaring her shoulders, she picked up the two eggs over easy and whole wheat toast, grabbed the coffeepot and headed to the table of the man who both excited and scared her. He was a broody sort; his darker than dark eyes were both mesmerizing and scary. They were so dark, it was hard to tell where the iris and pupil met. His strong jaw held a hint of whiskers as if he’d shaved hours ago. The dark shadow gave him a mysterious presence which she bet he loved. She hadn’t seen him walk in, but the length of his legs under the table and of his arms on top told her he was tall. From the side, she could see he was fit and firm. Nice. But no. She was steering clear.

“Here you go.” Sliding his plate in front of him, she lay his silverware, wrapped in a napkin alongside his plate. “Coffee?” Proud that she was keeping her voice even, she poured when he nodded. Then she watched as his eyes caught movement behind her and his back stiffened. She could feel the heat at her back before she heard Marcus whisper in her ear, “I’m watching you, Megan. You may as well make contact with that jerk you were married to before things get very ugly for you.”

Before she could respond, he was gone. Setting the coffeepot on the table before she dropped it, she clasped her hands together in front of her to quell the shaking. He was getting bolder.

Looking up slightly to see what her mysterious man was doing, her heartbeat hitched. Those deep black eyes bored into hers, but this time they held something else. Sympathy? Caring? Probably not, but he didn’t look as menacing as he had before.

She picked up the coffeepot and stepped back. “I don’t even know you. Why would I share that kind of thing with a stranger?”

“My name is Ford Montgomery, and I’m here for the same reason Marcus is—to find Waylon. But not for the same reasons. I was hired by the Kane County Police Department to bring him and Bobby Ray in. Looks like we could be friends and help each other out.”

Biting her bottom lip, she thought about it. Actually thought about it. His low sexy voice washed over her in a soothing way, and she’d bet her next ten checks he’d lured women of all kind in with those looks and that Sam Elliot voice of his. But, it was too easy to rely on him and too convenient. It would be nice, though, to have someone to turn to.

There’s still time to pre-order to get three bonus chapters!!!!!