Be in the know about new releases and reader exclusives!
Sign Up!
Skip to content
Dodge is coming
Ground Turkey and Potato Casserole

The next book in my Bounty Hunters series is Dodge. I’m still writing Dodge, but it’s close to finished. And, you can pre-order your copy to wake up with Dodge on January 22, 2019 right here!

But, in the meantime, how about we meet Jax, the smart, sassy and oh-so-tough heroine?  I like her, she’s got spunk. 😆 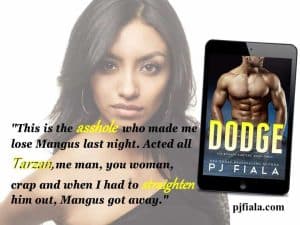 So, before I share a snippet, how about a few details about her?

Here’s a snippet of Dodge (unedited):

Pulling her motorcycle into the underground garage at GHOST headquarters, which is now home, Jax pulled into one of her two allotted parking spaces. Her sexy murdered out Jeep Wrangler sat in the other, looking almost evil with its darkened windows, black studded rims – well, black everything. She’d purchased it with her last bonus for a job well done. She and her brothers, Jake, her twin, and Josh their older brother, all worked for GHOST, as had their father before them. Sadly, this job was both lucrative and dangerous. Their father was killed while undercover some twenty years ago, when she and Jake were around sixteen years old. Most recently, Josh had also been killed while undercover. By Victor Santarino, the smarmy bastard. And though Victor was also now dead, his slimy brother, Mangus, was still alive and kicking and still running the family business of smuggling jewels and drugs into the US. The jewels he usually cut up and resold, the drugs were distributed.

She was taking this whole operation down if it was the last thing she ever did. To avenge her brother, she’d do anything.

Roughly pulling her helmet from her head and hanging it on the mirror of her bike, she pulled the hair band from her ponytail and scrubbed her fingers across her scalp to ease the itch from that damned helmet and hopefully some of her anger from that son of a bitch who caused her to lose Mangus at the Copper Cup.

Entering the elevator she jabbed at the button that would take her up one floor, still below ground, which is where their group met, organized, networked with other operatives and researched. The rest of their work was out in the field.

The elevator doors opened and the muffled sounds from the shooting range on the opposite end of the house calmed her frazzled nerves. She loved the sound and smell of the shooting range. The feel of her gun as the hammer fired off a round and the acrid odor of gun powder filled her nostrils, calmed her as much as a hot bath and a good book.

Instead of turning toward the shooting range, she walked down the hall and to the right to enter the computer lab. Her team lead, Gaige Vickers, sat at a computer, three monitors in front of him, all with documents and photographs arranged in a pattern that made sense to him. He worked in a methodical, organized way that the others admired but didn’t always appreciate.

“Hey Jax, look at this.” He called over his shoulder.

Without looking away from his computer screens, he pointed to a fourth monitor, off to the right, which showed the garage on a video feed.

Taking a deep breath she walked to his left and sat at the empty chair. 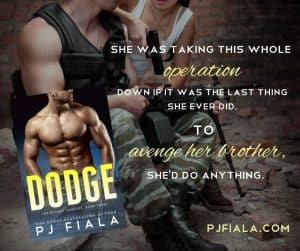 “This is where I think Mangus is staying. It’s below the mountain where Victor’s cabin is located. I think he has a hidden entry point at the base of the mountain and he’s built a hideout inside. It’s ingenious.”

her hair off her shoulder and took another breath. “Don’t be impressed by him. He’s an asshole of major proportions.”

“That doesn’t mean we can’t learn from him.”

The door swooshed open and her brother, Josh, along with the odor of gunpowder filled her nostrils.

“Hey there, how did it go tonight?”

“Shitty.” She turned on her chair to face him. He was the level head of the three of them. Meaning she and her brothers. “Some asshole thought Mangus was wrong for me and interrupted my plan. By the time I had him by the throat, literally, Mangus slipped out of the Copper Cup and I missed my chance at getting into his lair.”

Gaige chuckled, “Well, I may have found his lair so you may still be able to get inside and not have to do it by making him think there’s going to be a happy ending.”

“Then ending will be happy alright, but not for him.” Leaning in she looked at the pictures Gaige had now distributed across the three screens. Roads leading to a mountain. Paths and trails leading to what seemed like no where. But nothing else.

Josh moved in closer and lay his hand on her right shoulder. He could calm her with just his hand on her shoulder. “So what we need to do now is go and explore where those paths lead to and hopefully we’ll find out where Mangus is getting in and out of his hole in the mountain.” 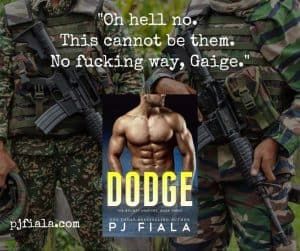 Gaige stretched his back, then raised his arms to stretch them before turning in his chair and standing. “So, until they come back here and tell us how to get in, we need to relax and rest up. Get ready cause we’ll be out there soon making our way inside.”

He moved as gracefully as a man of his size could move. Gaige Vickers was over six feet tall, broad shoulders which he kept chiseled by lifting weights on a daily basis. And, even though she’d never get involved with him in a sexual way, she enjoyed watching him walk away. Call her crazy, but the man had a great ass.

Preorder your copy of Dodge here!