Today, another labor of love is available to be seen by the masses.

If all of my books were children, Missing Destiny would be the one I didn’t see coming but am so happy to see come to fruition.

When I was first approached by Stephany Tullis and invited to participate in the Chandler County Multi-Author Branded Series I was finalizing my calendar for 2017. I was intrigued by the idea and let her know that I would have to think on it and see if a storyline came to me. A couple of days later I was talking to my niece who is studying to be a Chemical Engineer. She was having some second thoughts about continuing with the major because her Bio-Chem teacher wanted her to do presentation in front of the class and that was something she just did not do.

As I listened I could tell that she was struggling to receive the assistance she needed without giving up or compromising her independence.  One day I will let her know that she supplied me with the beginning thread for Dr. Shauna Nathan in Missing Destiny. 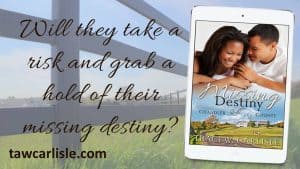 She spends Friday nights with charts and graphs. His best friend is a dog named Sebastian.All she’s ever wanted was peace and to feel she belonged. All he ever wanted was to disappear. She’s a city girl hiding in a small town. He’s back home hiding from his past. If life were perfect, they could be each other’s missing destiny. 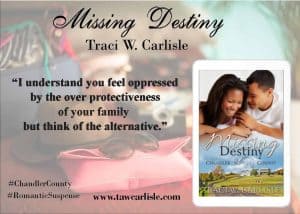 Dr. Nathan has done well for herself. She got her degree from Northwestern University and traded it in for an entry level position at Synamic Inc., refusing to use her father’s name for a loftier spot in the company. She has worked her way up through the ranks and has made a name for herself in the energy efficiency department. The job is good, and she loves her dad, but what she really wants is to be out from under is overbearing father’s reach. So what if she had her own security detail when she was 16 and 17 due to a death threat on her dad’s life. And yes, she’d gone through a harrowing experience her first year of college but that was 12 years ago. When was she going to be able to get control of her life? Her best friend, Maddison tries to convince her that she really doesn’t have it that bad. 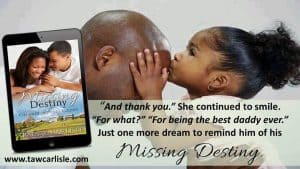 It has been seven years since Zach Mobley started from scratch. For him it’s easier making friends with animals than people. They are easy to read and there are no complications. He has picked out his one piece of furniture, befriended a dog after it followed him around for a week. He counsels and helps people with anxiety, PTSD and mental disorders observe and nurture horses as a form of therapy.

He is a bit of a recluse, but no one holds it against him. They know that once upon a time he had it all, but the happily ever after eluded him. 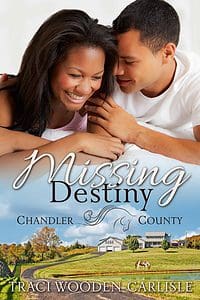 Zach is the epitome of the brooding, complex male who would rather aim for ‘contentment’ and leave ‘happy’ well enough alone. When Dr. Nathan comes to the Equestrian Therapy Ranch for a little R&R and therapy due to recent events it is all he can do to talk himself out of his attraction to her. When he comes to his senses he has to convince her that they could possibly have something worth fighting for. All of this leads up to the Kentucky Derby and big questions. For me, this story is romantic fiction with splash of suspense and a slice of reality. I hope you enjoy my concoction.