This week on Courage I wanted to talk about a wonderful woman who gave her life to save others, Neerja Bhanot. 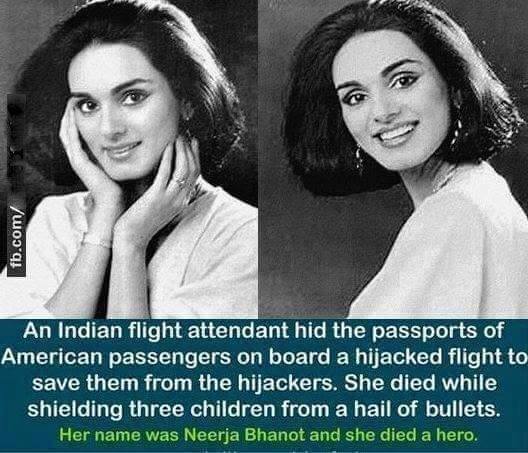 Neerja was born in India and just 23 short years later, lost her life in Karachi.  In her short life, she had earned the title Senior Flight Purser for Pan Am and was fatefully on Flight 73, which was hijacked by 4 heavily armed terrorists.

Neerja did many heroic things that day.  She quickly alerted the pilots of the hijackers presence so they could use their escape hatch and leave the aircraft.  She hid the passports of all of the Americans on the plane so they wouldn’t be executed.  She kept everyone onboard calm and reassured during the 17-hour siege.  When the terrorists started setting off explosives and opened fire in the plane, Neerja got all passengers safely off the plane, saving their lives.  And her final act of courage was to save 3 children, who she found hiding on the plane during a final walk through and ushered them to the escape hatch, when one of the terrorists saw and began shooting.  Neerja was fatally wounded, but still managed to get the children off the plane before she lost her own life.

Seldom do we hear of these acts of courage, but when we do, we should praise and celebrate the person(s) who showed such bravery.  Neerja had nothing to gain by risking her live, obviously.  But she couldn’t stand by and not try to help.  Many people are alive today because of her grace under extreme pressure, her quick thinking and her bravery.

Thank you Neerja, your contribution is immeasurable, your bravery, unwavering and your compassion for those whom you did not know astounding.

You can find out so much more about Neerja on the website dedicated to her – www.neerjabhanot.org