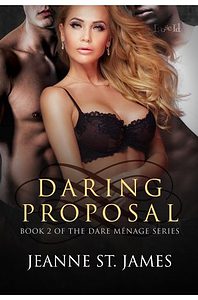 Since losing her husband years ago in a tragic accident, Eve Sanders hasn’t dated. Her husband’s death proved life is short, so why waste time denying her unfulfilled desires. Eve desires two men, but not just any two. Both happen to be former Super Bowl champions and best friends.

When both men participate in a Celebrity Date Night charity event, Eve’s determined to not only be the winning bidder for the retired NFL quarterback Lawrence “Long Arm” Landis, but also Cole Dixon, his former Boston Bulldog’s teammate. However, Ren not only has a problem with another man dating the same woman, but he definitely isn’t planning on sharing her in the same bed. Even if it’s with his best friend.

Openly bi-sexual, Cole is sexually attracted to Ren and has secretly wanted him for years. He’s never acted upon it, assuming Ren wouldn’t want to be with another man. Eve’s daring proposal gives Cole hope his dream with Ren will come true.

Being with two men is one of Eve’s fantasies, but never in her life has she been so bold. Not only is she nervous about proposing something so daring to the two men, but will both be willing?