Now, what was the appeal of suddenly writing a western romance? Several of my friends asked me when I bubbled over with enthusiasm at my latest project. “Well”, I explained, with a couple of historical fiction books already under my belt, when someone suggested I try my hand at this p ]]>


My friends were not convinced. So I continued on.

“Then I began my research: the Wild West culture and lingo books, articles, documentaries, CDs, paintings, photos. The more I delved into that time period, the more unique and colorful it all seemed. I couldn’t get enough of it! Outlaws, whose lives screamed “turn me into a movie,” railroads snaking their way out west bringing with them ‘civilization,’ but also train robberies, often retold in the ever popular dime novels. Tough pioneer women who threw away their binding corsets and shouldered rifles along with their menfolk, and immigrant ranchers craving a new life away from the choking poverty of eastern cities were all ripe subjects for storytelling. And romance? Well, romance is age-old. Get the right backdrop and a romance can be born.”

My friends wouldn’t stop there. “So, what made you think of making the story’s setting in a whorehouse, for goodness sake?” they asked.

I shook my head. “So…the more I dug into western books and articles, the more I became fascinated with the fact that whorehouse madams and “soiled doves” played as vital a role in the Wild West society as did schoolmarms, politicians, ranchers, cowboys, and gunslingers. Now, that started me thinking. What if a whorehouse madam with a heart of gold raised two young girls in that environment? What would it be like for these girls? How would they develop into women?”

I explored further. Talk about colorful! Whether it was reclining coquettishly across velvet-covered settees, drinking dark, sugared tea to make it look as if they were drinking “likker,” sidling up against their customers, these high top, booted, less-than-ladylike Ladies of the Night completely relied on their madams to protect them in more ways than one.

“And if you don’t believe me,” I told my friends––half defiantly––“here are some great examples of the colorful language used at that time, from the great book, “COWBOY LINGO,” by Ramon F. Adams”

“they came skally-hootin’ into town”

“handsome as an ace-full on Kings”

“put windows in his skull”

“big enough to hunt bears with a switch”

“as prominent as a new saloon in a church district”

“showed up like a tin roof in a fog”

“as wise as a tree-full of owls”

I stamped my foot at my friends. Now, after all this, how could I resist writing a Wild West romance? Yippee Ki-yay!!

They all nodded, smiled, and gave me a big, collective high-five…

Here’s What They’re Saying About THE DOLAN GIRLS:

1) “At times rollicking, at times poignant, but always authentic, well- researched and a beautifully told story.”

2)“A compelling read, perfect amount of romance, with a wonderful ending.  With Mallery’s warm writing style, you will be immersed in cast, time, and place.”

3)“S.R. Mallery’s words thunder off the page like a cattle stampede… her sharply written characters demonstrate that truly it was WOMEN who tamed the American West.”

4)“It’s a rip-roaring, nail-biting, heart-throbbing ride…my Stetson is off to S.R. Mallery, five stars all the way.”

5)”What a marvellous story… A well-researched book of historical value for this reader–entertaining and very warmly written. Highly recommended.”

6)“Mallery has done it again. THE DOLAN GIRLS leads you on a trip that is sometimes painful and sometimes loving. You are taken from innocence to womanhood. From love to heartbreak… Definitely 5-stars!”

7)“S. R. Mallery gives us a colourful view of America’s wild west of the 1800’s… The characters are endearing and the action is fast paced  … Looking forward to more from this talented writer.”

8)“If you’re a fan of the old west, strong women, and enjoy a great read, this book is for you. Recommend highly!”

9)“The Dolan Girls is simply a wonderful book. It brings the West alive in a way that is not only historically interesting, but one can’t help but become fascinated with how the story is going to play out.”

10)”S.R. Mallery knows how to write historical fiction in a way that hooks the reader…” 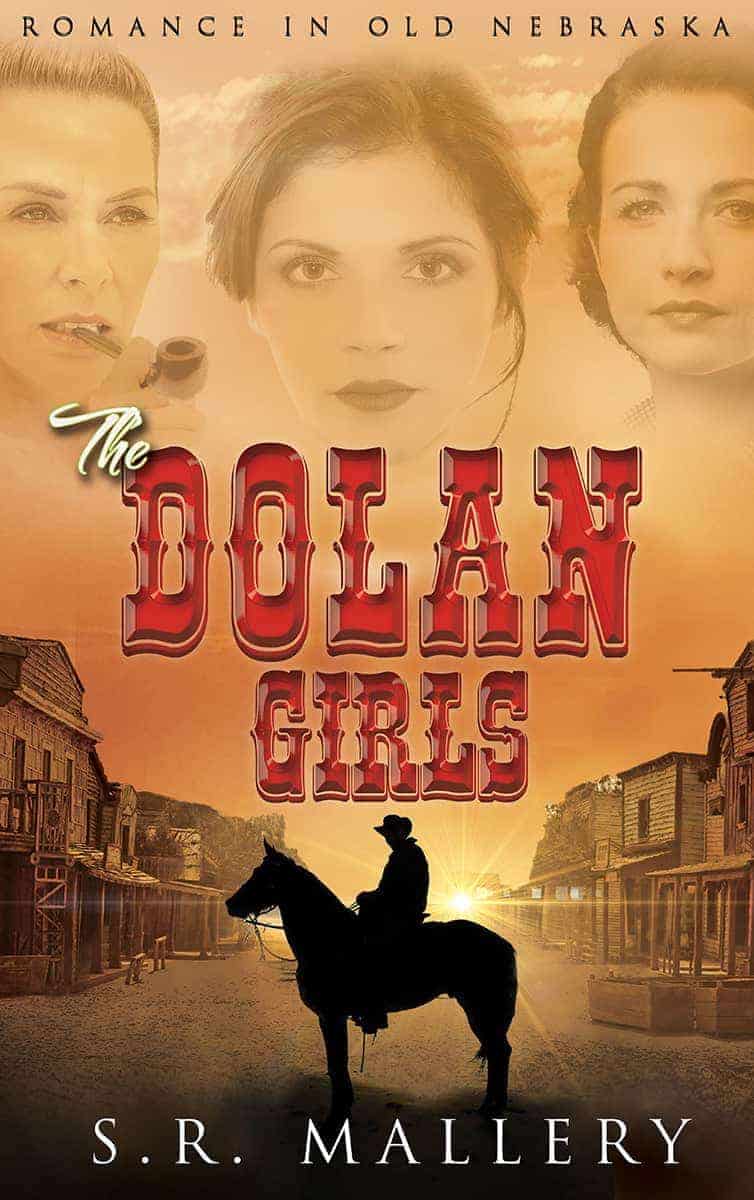 Here’s an Excerpt from THE DOLAN GIRLS:

Cora Dolan refused to talk about what had happened six years earlier, ten miles above town. Sealed up as tight as a snail in the cold she was, even to her sister Minnie, who was there with her the whole time; even with Thomas, who held her heart.

Yet one star-flushed night, as the wind’s edges were chilling and the shortening days were trumpeting the around-the-corner autumn, the two sweethearts pressed against a neighbor’s barn door, and Cora opened her mouth to share her past, then paused.

“What is it, Cora?” Thomas whispered, his steady arm around her sixteen-year-old waist, his mouth brushed against her ear. “Tell me what gets you sad sometimes. Let me help you.”

She forced a smile. “I’m all right, truly I am,” she said, placing her right hand gently over her heart for a couple of seconds. With her arms then draped over his broad shoulders, she uplifted her face for a kiss.

“Oh, Cora,” he said softly, his lips heading toward hers, “I love it when you put your hand over your heart. It’s so sweet. So trusting.”

Suddenly, a horse’s sudden clop-clop broke their embrace, sending them scurrying off to Cora’s residence. Several blocks away, still running, laughing, holding hands, they slowed their pace down to a stroll as they passed the livery stable, the local blacksmith, the church shut tight for the night, the brand new post office, and the local saloon with its strong bouquet of whiskey and beer wafting into the air. Finally they stopped in front of the red-curtained Madam Ana’s, South Benton’s second watering hole, the place for pleasuring most any man.

And home to the Dolan girls.

“I guess it’s good-night, then,” her young suitor murmured, angling for another kiss.

A male snicker rang out. “Well, well, well. What do we have here?”

Out from behind the southeast porch post stepped a slightly older young man, his black hat cocked forty-five degrees, his leather jacket opened, his six-shooter holstered just below his waist. He moved in close.

“Cora, sweet thing, why in the world do you waste your time with such a greenhorn, huh?” he sneered. “Be like the gals you live with and try a real man for once!”

Thomas stepped in front of Cora. “Wes, that’s no way to treat a lady. Let her be!”

As Wes half walked, half hitched away, chortling, Cora clutched her protector. “He’s always so scary,” she whispered…

Concentrating on his piercing blue eyes, she leaned in for a kiss. All of a sudden, they heard Madam Ana inside, laughing with one of her customers while an out-of-tune piano clunked loudly in the parlor. Although the kiss ended up much shorter than he would have liked, he said nothing when Cora turned and swung the front door open to head toward the back of the house where she shared a bedroom with her sister Minnie.

Just inside, Cora walked into the parlor, with its red velvet wallpaper and red carpeting, stretching out onto the large, winding staircase that led upstairs. She continued on, past the central eye-catchers of the room:  a large maroon settee, piled high with plump, satin pillows, and a glittering chandelier hovering overhead that word had it, cost a small fortune. Nothing was too good for the ambitious Madam Ana Prozinski from Russia, she was always being told.

“Cora!” called out Becky, a voluptuous blonde squeezed into a purple, gusset-enhanced corset, high-heeled boots, and her famous black velvet choker. “While we’ve been workin’ here a month of Sundays, you get to make a night of it! For two cents, I’d love to know what you’ve been doin’!”

“Yup, I reckon she just got a lick and a promise!” added a red-petticoated Julie to a chorus of shrieks and laughter.

Amy, in a rose colored shimmy and fishnet stockings, chimed in. “Look at her red face! Did you ever see anything so perty? It’s just like…”

“She’s always pretty!” Julie interrupted. “Talks fine, too. Must be all those speakin’ lessons from Pete she’s always taking.”

“Yeah,” Becky said, chuckling. “She talks like one of them refined ladies, but she’s also so pretty she could be one of us. I’ll bet she could bring in those cowboys by the wagonloads! She’s…”

Madam Ana strode into the room “Girls, enough!” You know I take no stock in dis kinda talk. Leave Cora be. Now go back to verk!” She looked around at her employees and clapped twice. “Now!” she barked. 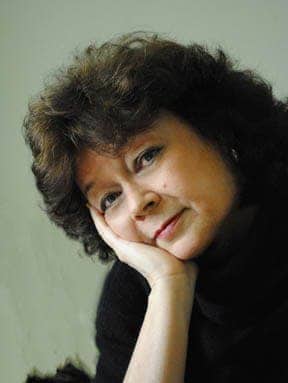 S.R. is giving away a signed copy of The Dolan Girls, so don’t forget to enter for your chance to win.

In the meantime, you can check out S.R.’s other works by clicking her links below:

Pinterest:  (I have some good history boards that are getting a lot of attention—history, vintage clothing, older films)

Amazon link to TALES TO COUNT ON:  http://amzn.to/1x8QqyD

Amazon link to SEWING CAN BE DANGEROUS: http://amzn.to/1P8OTyo

Audible.com link for SEWING CAN BE DANGEROUS: http://bit.ly/1uyFUuF

*Void where prohibited, must be 18 years old to enter, US Residents only.