Welcome to another installment of Open Book Blog Hop.  This week’s topic is:

If someone gave you a free plane ticket to anywhere in the world, where would you go and why?

This is a question my husband and I ask each other often.  Sometimes changed up to where would you live if you could live anywhere… 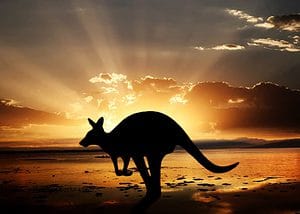 If money were no object, and apparently that’s the scenario here, I’d like a plane ticket to Australia.  It’s a place that I’ve thought about quite a bit over my years and for some reason it seems romantic to me.  The Australian people and government are also very similar to ours, so that would make things a bit easier to assimilate, should we decide to stay for a spell.  Also, the language barrier wouldn’t be too bad.

Mostly, Australia doesn’t seem to have the political crap we do, the terrorist bull that we do nor the excessive drama queens that we do.  It seems as though they’ve figured it all out, live comfortable lives and at least on the surface, it’s more peaceful.

Also, look at the beauty.  We have beauty here, that’s a fact, but my goodness we don’t have kangaroos.  A shrimp on the barbie, sure we can do that here, but it just sounds better they way they say it. And, how about that coast line?  Waking up to that each day would be something super special, don’t you think?

I’m not a surfer, but doesn’t Surfer’s Paradise look like a place to spend some time, or learn to surf?  Yeah, if I were given a plane ticket, I’d go on a walk-about down under.  Care to join me?

Where would you like to go if someone gave you a plane ticket?

Want to join in on our blog hop?  Click on the InLinkz Button below and join us.

get the InLinkz code