I mentioned Chandler County in an earlier blog post and now I’m super excited to show you the gorgeous cover the amazing Dana Leah did for me.  Isn’t it beautiful? 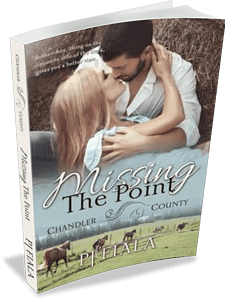 Mac has served in the Army for more than 25 years.  He and his best friend from high school, Levi (You can read about Levi and Sage in We’re Going to Make It), served together and have finally retired from Army life.  They’ve partnered with two other Army retirees, Sage and Dirks (Dirks has a book coming soon), to open Bluegrass Security.  They’ve relocated to Bourbonville, Kentucky, in Chandler County, and have opened their business.

Stevie Jorgenson, actually, Detective Stevie Jorgenson, has worked her ass off to get through the police academy, and move up through the ranks to make Detective in her home town.  Working against the former “good ole-boy” network toughened her and she did it without the assistance of her wealthy influential family.  It was just something she had to do on her own.  When she meets Mac the chemistry is instant and then life takes over.  (Things can’t be too easy.)

Sometimes, being on the opposite side of the track, gives you a better view.

Sam McKenzie has everything he needs in his professional life.  Bluegrass Security is going strong, he just purchased a home for the first time in his life, he even got himself a dog.  Personally, however, life was a bit unsettled. His growing crush on Stevie Jorgenson was unrequited – he just didn’t know why. She seemed to enjoy spending time with him, he’d caught her staring more than once, but yet, she seemed wary to take it to the next level.

Stevie Jorgenson had worked her entire life trying to step from the shadow of her wealthy family, including the family horse business. Excelling at the police academy and then making detective in Chandler County had been hard work. Now, her growing attraction to Sam McKenzie was beginning to shade her with its shadow. The trouble was his biggest client was her father’s rival in business and that could make things messy. The other issue was his client was also a dirty dealer and she had to uphold the law.  How can they make it on opposite sides of the track?

Releases April 18, 2017 but you can pre-order with the links below.

I’d love to know your thoughts!!!!

And, I’ve decided to give away 5 eBooks of We’re Going to Make It to get 5 lucky winners started on this series.  All you need to do is share the post below.