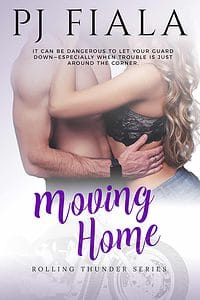 Moving Home is here!  I’m so excited.  So, for JT and Kayden’s move home, how about the first chapter?

“I’ll tell you this, Kayden Leathers. You owe the club a shit ton of money, and we aim to make sure we get it.” The evilness in the face that stood in front of her made her heart hammer and her stomach twist tightly. The menacing hazel eyes and a scar running the length of the left side of his face and tight jaw screamed ‘scary as hell.’

Mustering courage and working to keep her voice even, she replied, “I don’t owe you or your club anything. Any deals you may have had with my father died with him.” She moved to step around the club member in front of her, his tattoos proving his club affiliation with the Dakota Devils. He made to step in front of her.

Relief flooded her body when she heard Dan, the bank manager’s voice behind her. The Devil in front of her shot Dan scowl and left the bank without a look back.

“Yes. Thank you, Dan. I can’t wait to be far away from those guys.”

“You’ll do well to get out of town right away, Kayden; there are rumblings that they feel as though they’ve been screwed in some way and you’re to blame.” 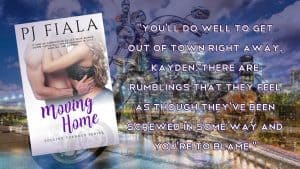 Taking a cleansing breath, she worked to put a smile on her face. “I don’t see how, but JT and Dakota are in the motor home waiting for me outside, then we’ll be out of here. Thanks again.”

Exiting the glass doors, she looked up and down the street, nervous about being accosted on her way to the vehicle. Relief swept through her when she saw no one lurking about. Hastening her steps to reach the motor home in the parking lot, she entered the side door as quietly as she could. When she’d gone into the bank, Dakota had been taking a nap, and JT agreed to stay with her while Kayden finished up her business here in South Dakota.

Directly across from the door were the dinette and table. Dakota still lay sleeping peacefully, her blonde curls in disarray, her ever-present biker boots still on her feet. The pink T-shirt with sparkling letters on the front captured the sun streaming in through the window above her. Her heart always swelled when she watched her daughter sleep.

Turning to lock the door, she moved to the front of the motor home where JT still sat in the driver’s seat. Apparently, he was eager to get home. She knew he had a lot waiting for him there. They both did. She’d be lying if she didn’t at least admit she was nervous, though not as nervous as staying here would be with the Devils still wanting money from her. Their anger swelled when they found out she’d sold the bar and property to someone else. They’d been so sure Oakes had changed his will to leave it to the club. Club members had swarmed the bar after they’d found out about the sale, yelling and swearing that they’d been robbed. Police had to come with a SWAT team to move club members away. They’d been so scared that they went to a neighboring town and stayed at a hotel until daylight when they could come back with police nearby and pack up as they had this morning. 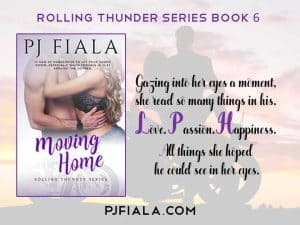 “Everything okay?” JT’s green eyes resembled fresh spring grass. The stubble on his chin gave him that sexy bad-ass look, and his usual ponytail said ‘biker’ all the way.

“Yeah. How about out here?”

“She’s been sleeping the whole time. Even snored a little bit, which I got on video.” He chuckled as he scrolled through his phone. “Look at this.”

He played the video of her daughter, slightly snoring and they both chuckled. “She’s going to hate that video.”

Giggling, Kayden kissed his lips briefly. “We have to go, JT. One of the Devils stopped me in the bank still griping that I owe them money.”

“Shit. I should have been in there.”

Releasing on Tuesday!  Links will be live then.