Chase
I’ve just bought the woman of my nightmares.
Technically, I bought the organic grocery store she works for. Point is, she cost me my two best friends ten years ago. It’s payback time, and I’m going to make her life hell.
When I’m not banging her silly and myself stupid.
I need to get my head back in business, because getting off is great, but “He was a man who had sex, and lots of it, in the worst possible locations, with the woman of his nightmares” isn’t the inscription I want on my tombstone.
Even if it’s true. 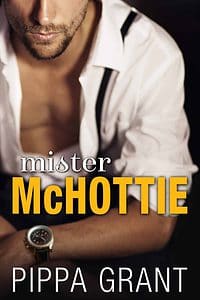 There are three things I hate:
Bratwurst in any form, my neighbors loudly boinking like farm animals, and Chase Jett.
Mostly I hate Chase Jett. It’s been ten years since he took my virginity – I’d make a bratwurst joke, but the unfortunate truth is that it would have to be a bratbest joke, and yes, it kills me to admit it – and now he’s not only a billionaire, he’s also my boss.
Turns out our hate is mutual. And this kind of hate is horrifically twisted, filthy, and banging hot.
I just might have to hate him forever.
Mister McHottie is 45,000 hilarious, hot, sexy words that your mother warned you about, complete with an organic happy-ever-after (or seven), a Bratwurst Wagon, ill-advised office pranks, and no cheating or cliffhangers.
Amazon: https://www.amazon.com/dp/B075KGZJ2D/