Stacey Joy Netzel has a brand new release in her Romancing Wisconsin series, and I think you’ll enjoy it.  Her other books are fantastic and this one is not one to miss.

Will a salacious scandal ruin her career – or bring her the love of her life?

Mechanic Clay Westfield thought he was on the flip side of a crazy media storm after his sensationalized divorce from pop superstar, Dianna Skye. Then she gives an emasculating interview that goes viral, and his ego makes him do something stupid enough to throw him right back into the eye of the abhorrent tornado.

Actress Peyton Riley returns home to weather the scandal threatening to torch her career. But less than three hours back in town, Hollywood’s fallen sweetheart finds herself caught up in the arms of a man who’s as infamous as she—and the paparazzi are right there to fan the flames.

Some crafty maneuvering by matchmaker Santa Butch throws the two together at Clay’s mother’s secluded ranch and sparks fly as new rumors are ignited. If their relationship is to have any hope of survival, they’ll have to sort truth from lies as they withstand the scorching heat from a ruthless media spotlight. 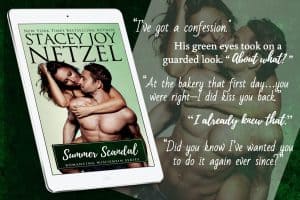 “Putting you right back in the spotlight.” He drew in a breath to speak just as she added, “I didn’t know you were going to be here.”

A slight frown made his eyebrows dip. “And if you’d known?”

She batted her lashes while flashing him a sugary smile. “Considering I was trying to avoid you, I wouldn’t have come.”

He gave a soft snort. “There’s some irony. I got the ticket from Brian a few days ago because I wanted to avoid you.” 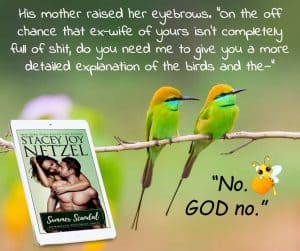 And yet the way he was looking at her right now, she was pretty sure avoiding her was the last thing he wanted. The fact he was still aggressively combating this crazy chemistry between them told her how much he wanted out of the public eye. It made her feel bad they’d totally confirmed all the speculation about the two of them.

Which is where the real irony lay—because what they’d confirmed still wasn’t true.

Peyton’s pulse skipped as she took in the rugged masculinity of the handsome man in front of her. The olive green button-up shirt he wore deepened the green of his eyes, and he’d rolled up the sleeves to his elbows, revealing his sexy, muscled forearms. God how she loved muscled forearms.

She glanced back over her shoulder toward the festival grounds. “You really don’t want to stay?”

“I didn’t want to come in the first place. The real question now seems to be, think you can endure the hour long truck ride home with me, or do you want to wait for your Nina?”

She smiled at the your Nina bit, but focused on the fact that was the second time he’d referred to the ranch as home for her as well as him. She knew it wasn’t on purpose, and yet she found the idea of Horseshoe Springs being her home sounded pretty damn good. It reminded her of the conversation with her Nina at the bakery earlier. About quiti—leaving—Hollywood.

Considering the tiniest bit of teasing in his voice, as if he didn’t want to but couldn’t help it, she tilted her head slightly for a better look at his face from under the hat brim. “I can handle the ride just fine. Can you?”

“What’s that supposed to mean?”

He gestured toward the souvenir mug in her hand. “How many of those have you had? As I recall, if it’s more than one, I run the risk of you getting frisky.”

She outright laughed at that. Little did the man know she didn’t need alcohol to want to get frisky with him. Then again, after their moment at the bottom of the barn stairs, maybe he did. “Most men would consider that more of an opportunity than a risk.”

“Peyton, you are a risk to me in every way possible.”

Her heart thumped hard at the admission, then took off racing. He said it with a wry grin tugging at his mouth, and yet she knew he believed every word.

She extended the mug to him, indicating he take a drink. His gaze met hers as he lifted it to his lips for a sip. Surprise raised his eyebrows before he dipped his head in a nod of acknowledgment while handing the lemonade back. He extended his arm in a sweeping indication of the direction of his truck. “All right then. It appears I’m safe.”

She pulled out her phone to call Nina as she walked past. Just to mess with his head—because he’d been messing with hers for days now—she brushed close enough to bump her shoulder against his chest.

“Appearances can be extremely deceiving,” she warned softly.

Three steps later, his resigned, muttered, “I am so screwed,” reached her ears at the same time Nina answered her phone.

New York Times and USA Today bestselling author Stacey Joy Netzel is an avid reader and loves all movies with a happily ever after (Ever After being a favorite). She lives in Wisconsin with her family, a horse and some cats. In her limited free time she enjoys hiking, canning fresh garden veggies, and visiting her parents in Northeastern Wisconsin (Up North), at the family cabin on the lake. Her bestselling series include the Romancing Wisconsin Series, Italy Intrigue Series, Welcome to Redemption Series, and Colorado Trust Series.