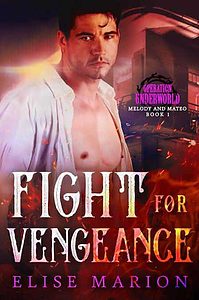 Once again I’ve been able to convince a fellow author to share one of their books with you and only you. And, yes, it’s free too!

This week Elise Marion has offered up her Fight for Vengeance to you all. Take a look at this blurb:

This is book 1 in the Melody and Mateo trilogy, part of the Operation Underworld Series.

FBI Agent Mateo Garcia has spent the past year working to bring down a serial killer known simply as ‘The Satanist’. But as time drags on with fewer and fewer leads, he begins to wonder if he will ever solve the case—that is, until his wife becomes the latest victim. With revenge consuming him and his daughter’s life in danger, Mateo is now more determined than ever to bring the murderer to justice. But how is The Satanist able to kill without leaving any evidence behind, and what does that mean for his investigation?

When a mysterious invitation turns up on his doorstep, Mateo’s eyes are opened to a brand new world—one he never could have imagined, even in his worst nightmares. His suspect is actually a demon, and there’s only one way to bring him down: join Operation Underworld, a secret organization dedicated to policing paranormal entities. With the resources they offer, Mateo finally has what he needs to catch his wife’s murderer once and for all.

What he doesn’t expect is Melody Frank, a waitress working at a club frequented by ‘The Satanist’ and his followers. The attraction that sparks between them can’t be denied, but Mateo is after vengeance. He can’t afford to lose his head over a woman. However, Melody’s secrets run deeper than he knows. Before long, what she’s hiding begins to his intertwine with case, making it impossible for him to separate business from pleasure. When the truth about Melody comes out, he is left wondering whether she can be trusted, or if his connection to her will ultimately kill his one shot at revenge.

Read more books in the Operation Underworld Series.
Operation Underworld is a Paranormal Romance series co-authored by Elise Marion and Carly Fall, about a secret organization of people who police the spiritual underworld … because sometimes regular law enforcement just won’t cut it.
Each story arch features 3 books about the same couple, and each ends with an HEA!

Melody and Mateo by Elise Marion

Connor and Sami by Carly Fall