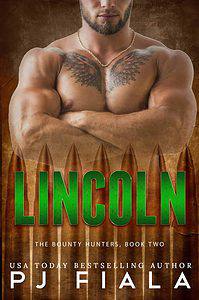 Tuesday is the day that Lincoln releases – do you have your copy pre-ordered?  That’s a sure way to make sure it appears on your Kindle first thing on Tuesday morning.  What a way to wake up.

If you read Lincoln in the Love Under Siege box set, thank you.  But if you’d like your very own copy of Lincoln on his own, I’ve added 9 chapters to finish out the story of Lincoln and Skye.  It’s perfect now!

So, wake up with Lincoln on Tuesday morning. 😀Pre-order your copy here.

Lincoln hit the floor with a thud. The air flew from his lungs, his legs wrapped around the legs of his prey, his arms tightened and bunched as he held the scrawny disheveled man with the putrid breath off his chest.

“You want a piece of me, you big son of a bitch? I ain’t scared,” his target spat.

Groaning as he heaved the gangly offender from his body, Lincoln rolled and scrambled to his feet. A quick pounce on the man—not just any man, but Jimmie Molder — the man who’d beat the crap out of his wife, left her for dead, then failed to show up in court. Jimmie yelled as all the breath he had in him whooshed from his lungs. The smell of stale beer and cigarettes, body odor, and bad breath—the worst of all smells—flew into Lincoln’s face with that yell. It was damned near enough to make Lincoln let go, but not quite.

Taking just two breaths to regain some of his lost strength, with a grunt he hefted Jimmie from the floor. With a fistful of ripped, grimy T-shirt from Jimmie’s back, Lincoln thrust him in front of him and out the door of the bar. His face may have opened the door for him, but Lincoln didn’t care right now. The filthy piece of shit hit him in the back of the head with a pool stick, and that girl-fighting bullshit didn’t sit well.

Ramming the front of Jimmie’s body against his pickup truck, Lincoln held both of his dirty hands together in one of his big fists while he pulled the zip tie from his back pocket with the other hand. Binding him tightly, he lay his forearm across Jimmie’s shoulders as he dialed the local PD. Abe, his German shepherd, barked from the backseat, his face pressed against the window. The gap left for him to get some fresh air wasn’t enough to get his big head through, but the incessant barking was deafening.

“Yeah, this is Lincoln Winter, and I’ve got Jimmie Molder tied up in front of the Two Timin’ Saloon.” Looking at his pup, his simple command, “Ruhig” quieted Abe down.

“Great job, Lincoln. Did you want to bring him in, or do you need officers to come and welcome him home themselves?”

“I don’t want this filthy slug in my brand new truck, so I’d appreciate it if your finest could escort this snake’s belly to jail in style.” 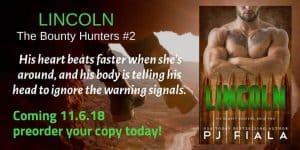 Ending the call, and possibly adding a little extra pressure to his mark forced up against the truck, if the groan and mumbling from the lips pressed into his shiny new Ram were an indicator. Hopefully, the cops wouldn’t be long in getting here, and he could run his new baby through the car wash to get Jimmie’s filth off it. He’d hate for the paint to peel.

Sirens in the distance had him hopeful, but the small crowd now gathered at the front of the bar watching Jimmie’s capture worried him just a bit. He couldn’t take on more than three or four of these guys if they decided to jump him and help Jimmie, but he was stuck here right now. 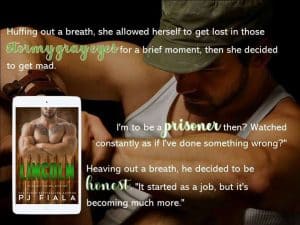 Flopping down to sit on Jimmie’s feet, he wrapped his hand around the zip tie holding Jimmie’s hands together and held him in place. A quick survey of the side of his truck showed some saliva, but no other nasty looking marks. Maybe he’d need to get himself an old beater truck to run these criminals down. He had the money. Shit, money was flowing in from all sides these days. If it wasn’t for his friend and partner, Dodge Sager, helping him run bail jumpers, he’d be working damned near twenty-four seven.

When he’d had this idea of partnering with Ford Montgomery and Dodge to form the bounty hunting business he honestly thought they might have a few lean months. But with all of their contacts, they’d found business right away, and sadly, that meant there were seedy characters all over the damned place. Their response to that of late when discussing it has been, “And that’s great for business.” Their bounty hunting business to be precise.

Now in their fourth month, Ford only focused on lining up their runs, and he and Dodge were on the road hunting the bastards down. Ford had done this for about twenty years prior to their business formation while Dodge had been a state trooper.

Lincoln was first a cop then a detective down in Arkansas where he was from. The move to Lynyrd Station, Indiana had done him a world of good. Sweet little house on the river, Abe at his side. The only thing missing was a sweet, hot wife like Ford had. Only not the pregnant part—not yet, anyway. Ford had gotten Megan pregnant before they got married. He wasn’t going to do that. He just wanted someone to spend his free time with. Someone who didn’t need fancy-ass dinners, shows, and champagne.

The tires of the police car crunched on the gravel and brought him from his daydream or stupor, whichever it was. Recognizing both officers immediately, he greeted them with a huge smile. 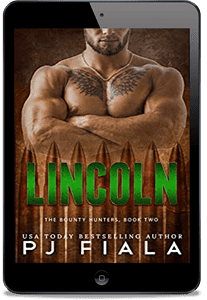 “We won’t, but I’ll bet you’ll find a fuck buddy once you get to prison,” the second officer, Jerry Robards, teased.

Jerry pulled a sheet of paper from his back pocket and signed it. Handing it over to Lincoln while his partner took over pulling Jimmie to his feet, Lincoln smiled and took his ticket. It was worth two-thousand dollars to the agency and a cool one thousand that went straight to him. It was his fourth ticket this week, and it was only Wednesday.

“Thanks, Jerry. Don’t let this piece of shit get away now.” He laughed as Jimmie began swearing up a storm while they put him in the back of the police car. Lincoln shook hands with Jerry, waved at Randy, and hopped in his truck, noticing the crowd at the front of the bar had already gone back to drowning their sorry asses in liquor.

Get your very own copy of Lincoln!