I’ve mentioned before that we were headed to Colorado for vacation this year, well, we’re here and it’s amazing.  I’m honestly not sure I have enough adjectives to describe the scenery here, and holy crap, who knew?  I’ve heard the stories and the songs over the years, but I guess unless you see it on your own, you just can’t imagine.  Obviously, I didn’t.

So, I hope you enjoy this series, and I hope I do it justice, because this state is amazing.

Since Colorado is so far away (20 hours by car/truck) we didn’t want to chew up all of our vacation traveling, so we decided to trailer the bikes. (I know, I know.  A few years ago, I never would have dreamed I’d be all for trailering, but here we are, twice in one year.)

So, we have 8 bikes and 14 people and now we have to decide what time of day to leave.  Two people couldn’t leave until after 4:30, the rest of us wanted to leave earlier.  So, we decided to split up; three on their bikes and the rest of us in three vehicles.  We have the truck pulling the trailer and four people and two other vehicles with three and four people in them.  The bikes were loaded the Sunday before, so we didn’t have to do it before traveling.  All we needed to do was pack our clothes and go.  Kinda nice, actually.

Here I have some pictures of the trailer being loaded.

So, we took off from Green Bay, at noon on our departure date, which was Thursday, August 3rd. We have 14 people total including The Biker and I and as you can imagine, it’s difficult moving this many people.  You know, all the personalities and ideas and our planning meetings, while productive, often got off track often.  But that’s to be expected.

Off we go on our first leg of the trip.  We were hoping to make it to Omaha, NB before stopping for the night, and we did just that, arriving around 10:00 p.m.  We had a few beers, told a few jokes and stories and enjoyed the company.  Oh, and snacks, good grief we have a ton of snacks.  So much for my diet.

Leaving by 7:00 a.m. the next morning, we took off expecting to make our destination by 4:00 p.m. or so.  One mishap, a flat tire on the truck pulling the trailer, but it was easily fixed and we were on our way within an hour.  Now all we had to do was get to the house we rented and unpack.  Tomorrow we ride… 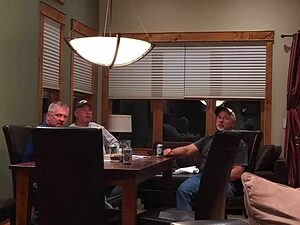