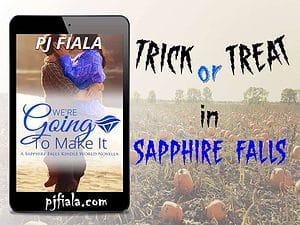 Thanks for stopping over and welcome.

First of all, a little business.  This is a very active blog. Every Thursday I send out a newsletter filled with stuff – fun stuff.  Every month there is a giveaway, check out October’s giveaway here.  Every Tuesday I have a guest author who also gives away a book to a lucky winner. Every Wednesday I have a recipe that I’ve either made, tried or someone I know has made, so they are super delicious. Thursdays I add a little goody of something or someone, an ARC, a cover reveal, and/or a new release and that comes straight to your inbox!  Want to get in on that action?  Sign up for my reader’s club and let the fun begin.

Now, on to the Trick or Treating. 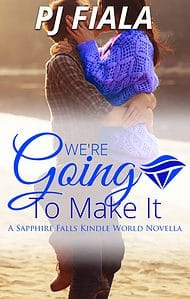 nter the Rafflecopter and tell me where you’ve had the most fun trick or treating (can be a place you want to go in the future) and why?

TREAT:  I’m giving away three eBooks of We’re Going to Make It, my Sapphire Falls book.

In the security business things can happen fast – the same is true in the business of love.

Levi Jacobson spent 25 years serving his country in the Army. After his fiancée and the love of his life sent him a Dear John letter telling him she was marrying his best friend, he dug into his career with a vengeance, marching up the ranks to Major, right after vowing to stay away from women. Now retired from the military, and managing his security firm in Sapphire Falls, he can finally spend his days as he wants, earn a bit of money and enjoy small town life.

Sage Reynolds joined the Army at 18 to escape her small hometown and finally live her life as the woman she was – a tomboy. She excelled in everything Army; shooting, interrogation and surveillance. When her father became sick, she found herself back home in the small town she’d left as a teenager. A year later, her father gone, she needs a job and preferably in the big city. Overdue bills and no prospects force her to accept a job in Sapphire Falls for a man who is sexist, obnoxious and terribly attractive.

Levi and Sage need each other, at least as far as business is concerned. But, what about personally?

10 thoughts on “Trick or Treat in Sapphire Falls”