I’ve had some stomach issues for the past few months.  Food not digesting and sitting in my stomach like a hot rock for hours after I eat.  Even the smallest thing like a baby carrot would sit.  I went to the doctor and he put me on a probiotic, which helped, until it was gone.  Then, I started my Kombucha, which I’ve blogged about before and that has helped so darn much.  Still drinking my 8 oz. a day.  Then about four weeks ago a friend said he’d lost more than 23 lbs. by not eating bread.  Okay, I could do that.

So, I’ve been largely bread free for 3 weeks now.  Sadly, I haven’t lost a lot of weight, or any that I can tell, but there are some positives with this.  I suffer from extreme swelling in my fingers and ankles with the tiniest grain of salt.  That is largely gone.  My stomach has improved even more (still drinking Kombucha though, not risking it), and I don’t feel bloated.  I still eat some pasta, some rice just no bread.

So, we’ve tried to get creative with making food and especially lunches.  We’ve wrapped lunch meats and tuna in a cabbage leaf, which is surprizingly delicious.  A bit crunchy and healthy, but there needed to be more than just cabbage.  Then I saw this on Facebook and tried it.  LOVE it!

Peel as much or as little as you like. 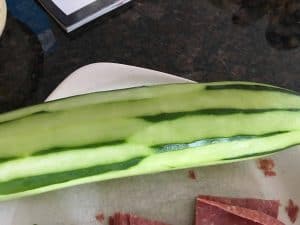 Using a spoon, scrap the seeds from the cucumber. 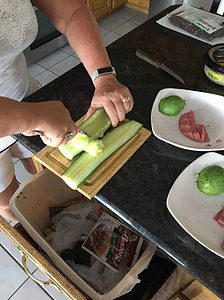 Add a topping of your choice, I used humus here. 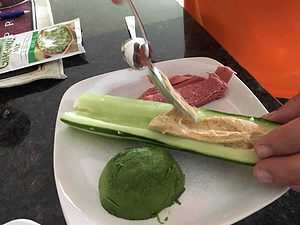 Add meat or your choice of other filling.  Here, I used corned beef. 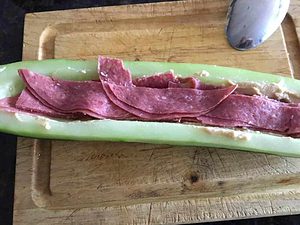 Top with anything else you love.  I added some avocado. 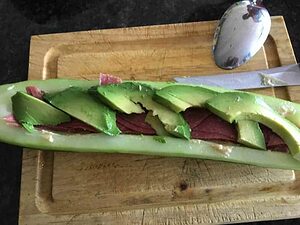 Serve. (My husband likes tomato, me, not so much.)

Next time I think I’ll try spreading in some cream cheese.  Maybe try some ham.  What would you put in your cucumber?